This year I decided to celebrate Memorial Day weekend at Movement Detroit’s 10th year anniversary with artists I’ve been dying to see for quite some time. The festival was definitely life changing. If you’re a techno lover, Movement Detroit is a much needed experience.

This year’s lineup was also amazing with artists who played all types of techno, house, and dance genres. I enjoyed some performances more than others, but overall the festival was unforgettable. Not only did I see musician goddesses, but I learned a lot of new music from artists I didn’t’ follow before.

1. Guti: Guti was the first artist my friends and I saw when we first arrived to the festival. He played at the Beatport stage, which then became our favorite spot. The stage was right next to the river + Canada, resulting in a very beautiful view. What’s not better than dancing to good music with the perfect view?

2. Zip: This dude killed it. I was actually impressed with how good Zip was. His set was one of my favorites and probably the one I danced most to. I’ll be listening to more of his music. He is definitely someone I’d like to see again.

3. Davide Squillace: I had been wanting to see him play after writing a post about his organization This and That Lab. His set was right after Zip’s so I had very high expectations before he started. He was incredible, plus the sunset after it rained made the experience more enjoyable.

4. Caribou: Caribou was my all time favorite out of all the others at the festival. I couldn’t believe what I was experiencing during their set and luckily with a front row seat. Their performance was magical, starting with the lights and ending with their instrumental expertise that made me get goosebumps. 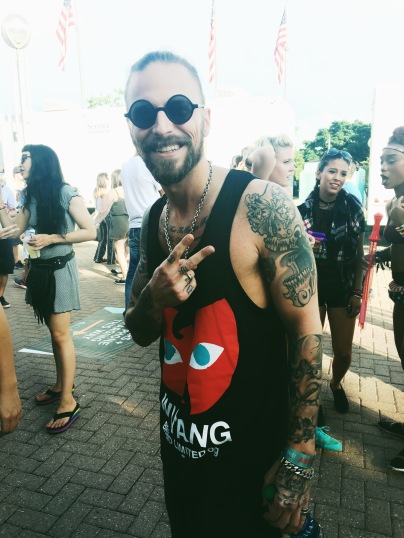 1. Art Department: Before Jonny White’s set, my friend and I got the opportunity to meet him and take a photo for the blog. He had a pretty intense and deep performance, which is something I admire in musicians. When you see and feel the artist’s passion as they’re playing and doing what they love, is something I die for.

2. Bixel Boys: This was my third time seeing them perform. It was kind of difficult to enjoy their set because of the stage they played at (Underground Stage). You could hardly see anything due to the lights that were being used. However, that didn’t stop anyone from having fun. I do wish the Bixel Boys had played more house, but other than that they’re always great to see.

3. Ellen Allien: She is a recent favorite. A friend introduced me to her music before her set and dragged me with her, which I’m glad she did. Ellen is a bada*s DJ. She had all the good vibes: great dance moves joined by her awesome music.

4. Âme: I was excited to see Âme because of his Sailor and I’s mix, which he sadly didn’t play. There’s something about him that I find very different from others DJs. He seems like an interesting individual. The visuals were also quite amazing, making you feel as if your were in space.

2. MK: I never really get tired of seeing this guy play. I still remember the first time I saw MK perform at SXSW in Austin and ever since he’s been my favorite DJ. I really admire his moves of enjoyment during his sets, it’s very contagious.

3. Guy Gerber: It was my first time seeing him perform and it won’t be my last. I really enjoyed Guy Gerber’s set as a whole. The scenario, the lights, the music, and the audience’s vibes.

4. Justin Martin: This dude is always fun to see. I think his personality makes it easier to enjoy watching him perform together with his music. The dark techno vibes in his songs makes him portray a serious persona, yet he’s always smiling and having a good time.

5. Nina Kraviz: There was no better way to end the festival than with this legend. I have so much respect for Nina, which made the experience more exciting and nerve-wracking. She also performed at the Underground Stage, where it was very dark making it hard to see, but the music was perfect! She also ended Movement at one of its after parties at Populux after closing for the fest.

Movement Detroit is a must go for everyone, more specifically techno lovers. I’m happy I can say that I finally experienced Detroit as a whole. I hadn’t had that much fun in a long time, so I highly recommend it! Movement Detroit changed my life and it can change yours too. The festival’s uniqueness makes it difficult to not fall in-love with it: amazing artists, incredible people, long hours of dancing (days and nights), fun after parties and Old Miami on Memorial Day, what more can you ask for?