Singer-songwriter Melissa Brooks, the only female in an all-male band, has come a long way for someone in an all-girl punk band in high school. Brooks, her guitarist “and muse” Ryan Frailich, Josh, and Colin all form part of the psychedelic surf punk band, “The Aquadolls.” 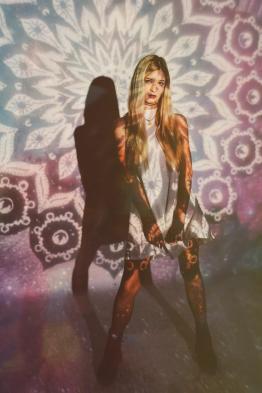 “I had been writing music all my life, but never recorded anything or shared my music with anyone, so when I met my Ryan, he helped record all of my early demos, and I put them online as ‘The Aquadolls,’” said Brooks. “Once people started listening to my music, and I started getting offers to play shows, I was like ‘Oh crap, I need to actually get a band together,’” she continued.

So, what inspired the name of the band? Brooks explained how it was invented by an old friend. “The name just stuck. That’s when I was trying to make the all-girl band thing happen, which is funny, cause my bandmates are all boys. I guess I’m the doll,” she excitedly shared.

There have also been rumors that Brooks will no longer work under the name “The Aquadolls.” She will be transitioning as a solo artist, and she goes into details about it: “The Aquadolls is essentially my solo project already, since I do all of the writing. The name is misleading, and for my next album, I’m going under my own name because it seems silly

for me to hide behind a band name when it’s my music,” stated Brooks. She continued, “I’m still playing shows as The Aquadolls, and our studio album ‘Stoked On You’ is seeing an official release December 2.”
How will Brooks be different from “The Aquadolls”? “I’m focusing more on expressing myself through lyrics. “The Aquadolls” is more of my silly side, not really to be taken too seriously,”

Brooks said. She continued by explaining her new album and how it will be more reflective of herself, and all the things she’s been going through in her
life. “It’s really expressive and really beautiful, yet still has all of the same fun vibe as the older stuff,” she concluded.

When asked what the public could expect from her new album, she emphatically replied, “World domination! I want this new music to reach as many people as possible, as it has more of an accessible sound, and I feel like a lot of people could relate to the thing I’m singing about.” She further mentioned, “Two demos that I put online a while back are going to be on the album, including ‘Teen Dream’ and ‘I Hate School.’ I am starting to play some new songs at my shows, as well, and it’s been seriously fun.”

I concluded the interview by asking Brooks some personal questions about her music preference. We all know everyone loves learning about the artists our favorite artists admire. Brooks shared that she loved Gwen Stefani, Courtney Love, and Grimes. Lately, she has also been listening to Charli XCX.